There comes a time, when every man must rise and do what is required of him.  Fight against evil and injustice.  Lay down his life for what is right.  Start a campaign to get a hot chubby guy in tight overalls.  Yes.  It is a heavy burden, it is not easy.  But nothing worth doing ever is.  The rewards are not only for us but for our children and our children's children.  Because future generations need to be able to wank off to hairy, heavy men.  It is your legacy and your day to stand and be counted has come.

Now before we get to the main thrust (!) of this blog entry, I will sweeten the deal with some videos I have come across.  That's not a crude pun.  I have masturbated to each of these.  I should also advise that normal service will resume on this blog at the weekend.

So, first up.  A while ago I posted a wee video I took of a nice daddybear with a moustache that I spotted...stalked...on the street.  Well, here is another one.  This guy is rather special to me.  He is the street sweeper that works my neighbourhood and has been doing so for several years.  Frankly, it has every fibre of decency that I have not to have sexually assaulted him...yet.  He has a magnificent arse, nice hairy chest, wonderful beard and beautiful blue eyes.  I share him with you, knowing that the Day of DaddyBearAdmirer has come


OK.  So next up is an interesting little video that I came across on YouTube.  It is a short film by Peter Greenaway - so that should tell you immediately that there is going to be cock.  It is called 'European Showerbath' and unfortunately there are naked women in this film.  On the plus side, there is some serious cute daddy penis action in here.  I only watched it for the political art and provocative artistic statement but you may like it because it has chubby naked daddies.  Philistine.


Is that not just he cutest thing ever?  I never knew that's how you pronounced his surname.  This blog is so educational!  Anyhow, I may have mentioned in the past that aside from the painting & drawing & being general eye-candy for the population of Scotland, I also dabble in music.  Recently, I have been thinking about Airwolf.  You know, the TV series about the helicopter that was in no way like Blue Thunder.  Ernest Borgnine wasn't very appealing to me by the time he was in the show, however I did notice that his bod looked fucking amazing in the pilot jumpsuit.  His arse was stunning.  Just put a back on his head and I would have tapped that.  Then it struck me.  How good would Mr Riehle look in the same outfit. After I finished my six hour masturbation marathon at the thought, I decided to get this party started.  So, firstly here is my revamp of the theme tune:

Now that won't help a film get made.  And it certainly won't get Richard Riehle in it.  Or the second act where he is chased, naked, around a Villian's volcano lair.  So, I created a poster.  It is your sacred duty to share this poster and convince people that it is a real thing.  Keep dropping into conversation that Reihle is perfect casting and that this movie will be so awesome it will remove any unpleasant memories of Jan Michael Vincent.  God Speed, my daddybear admirer brethren.  The fate of a hot ass in a jumpsuit depends on your success. 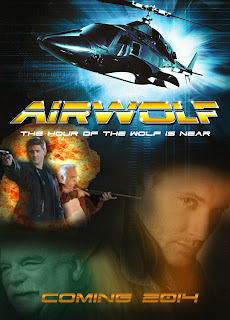