The postings of Daddybearfrontier are somewhat of a sacred duty.  Come with me now into the realms of history as I explain, and enchant you with the history of how this blog started.  The year was 1559, and a newly-crowned Elizabeth I was known to take light walks in the grounds of Richmond Palace.  On June 17, whilst partaking of such a walk, she spotted a large framed hairy man gathering wood.  Initially she was struck by how his frame reminded her of her father, Henry VIII although he was of much more handsome a visage.  It was a hot day and the man removed his linen shirt to reveal a sea of dark and grey body hair, sweat glistening on the belly hairs.  At this point, The Virgin Queen's emotions became much more ambiguous:

"As I gazed upon the gentle bosoms of this large, ursine like creature, I did notice a sensation in my loins that I, as a woman of noble virtue, had not quite experienced before.  The large, sweating, hairy peasant did indeed have the countenance of my late father but also set my foo-foo alight with improper desire. Troubled, I retired to my parlour wherein I considered this occurrence and did flicketh my bean before slumber"

Noticing the fatherly aspects of this man, who in her nude sketchings seems to have looked uncannily like Jackie Gleason with an infeasibly large penis, and his 'ursine' quality, Queen Elizabeth I coined the phrase 'Daddybear' in her writings.  In 1560, she set up a secret commission by Royal Charter to document and retain information on all such men.  Throughout the ages, the torch has been passed from generation to generation to document the 'gentle beasts' of Elizabeth's secret tastes.  The documentation stalled in the 1990's where it appeared that no-one was interested in anyone who wasn't the 'cute one' from a boyband.  In the 2000's, I as the Chosen One, have attempted to carry on the curating of such men.

Now that you know the importance of this blog, I shall continue.  I normally write about all manners of men.  Actors, Musicians, Politicians, prominent Business Leaders etc.  People with a significant media presence and are in the public eye.  To this day, I have never covered a policeman.  Whilst there are frankly fucktons of hot policemen out there, I don't tend to post random men.  I don't search social media pages or steal people's private pics for this blog.  I stay strictly in the ethical public domain of standard Google searches.  However, I had noticed a really large increase in the number of hot pictures of policemen in my tumblr feed.  All were very masturbation-worthy but then I saw the ultimate:

This man.  For me, this man is absolute perfection.  The only thing wrong with him is that he isn't in my bed.  Perfect build, intriguing crotch, stunning moustache and a very handsome face.  My dreams are haunted by him, teasing me with his address that I forget upon waking.  He is such a dream cocktease.  The following little gif adequately describes every day since seeing his picture

Why yes - that is a shot of me naked

Anyways, sadly I could find no more on this man.  However, I did find a cop during my searches who not only is a very, very fine daddybear but also has, at the moment, a high enough public profile to qualify for this blog.  His name is Steve Horgan.  He is from Boston and his claim to fame is, ummm, raising his arms.  Look if fucking Kim Kardashian can become famous then this guy should be going down in the annals of history.  In America, they have a game called Baseball and it is similar to cricket in that it involves a bat and catchers and is so mindnumbingly fucking boring that even the crowds who turn up to the games actually just spend their time talking and drinking beer.  Boston have a team called the Red Sox and this cop was on crowd control (I am thinking that may be the easiest fucking job in the world since most of the crowd would be comatose ten minutes into the game).  He was in the bullpen, when, look I don't care.  Somebody, hit the ball and somebody dived over the barrier to catch the ball.  Apparently, Steve was so caught up in the game that he got all excited and raised his arms in the air.  And it was photographed.  And somehow that merited him making public speeches and turning up at events to raise his arms like a trained monkey.  That's all it takes to be famous now.  I should point out that if I got the chance to pose for a photo with him, I'd totally get him to raise his arms (it would make it easier to try pull his trousers down and get my lips around his penis before he could stop me).  I don't mean to be picky, but if you see a unarmed man running and lunging toward a policeman - do you really want to see the policeman sticking his hands in the air?  Is that standard police practice?  Anyway, he is really cute and is as Boston as all get out.  I kept hoping that in his press conference, they would ask him what he had for breakfast so that I could hear him pronounce coffee as 'Kaw-fee'.  Sadly, the new Neo-Nazi fascist movement that is 'MoVember' have made him shave off his beard and I fear it may not return.  If he does not grow it back, everyone involved in organising that event deserves to be shot.  Or forced to sit through a baseball game completely sober.  No, just shot - I'm not that cruel and unusual. 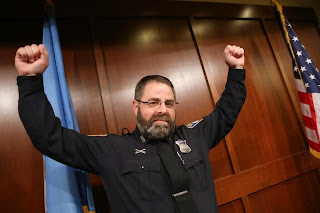 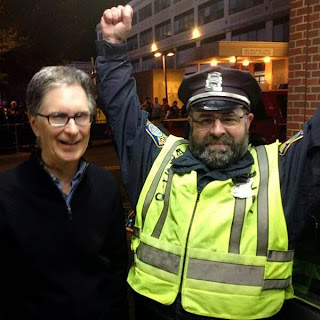 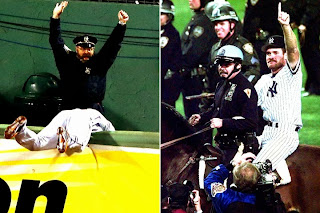 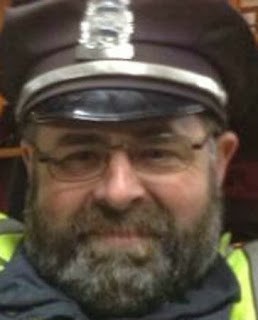 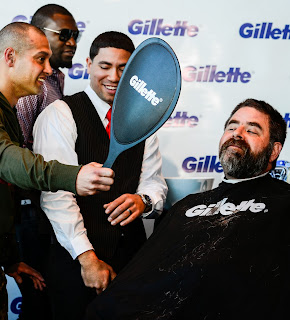 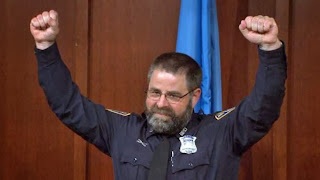 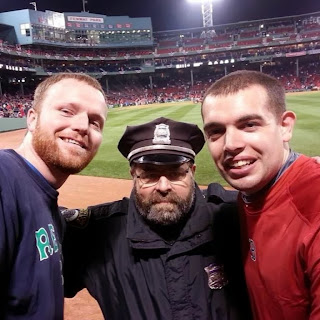 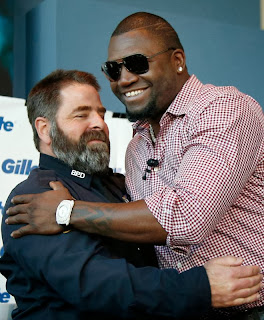 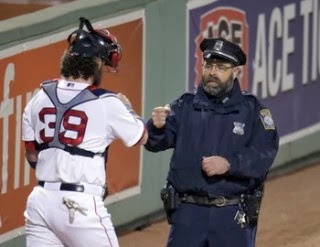 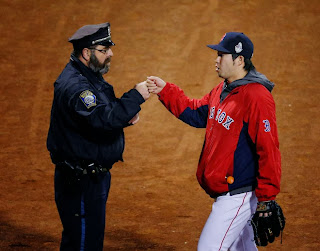 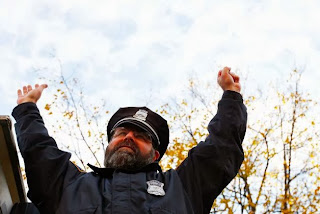 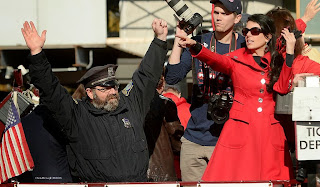 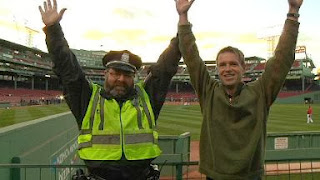 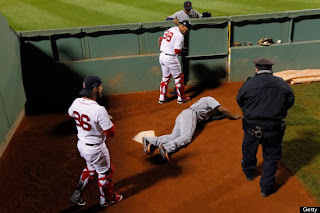 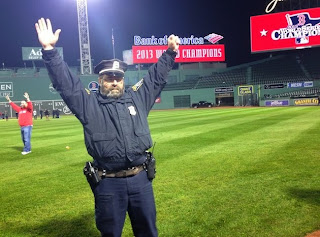 Seriously though, his gravestone will read "Here lies Steven Horgan.  He raised his arms.  A lot.  We had to bury him in a Y-shaped coffin"