Ooooh!  Look at me being all 'breaky-formaty' again this week!  Instead of bringing you a guy this week, I thought I'd try something different.  This week it's all LOLcats.

That's a lie.  I'd never stray that far from my core obsession.  But there will be very few pictures featured this week.  Instead there will be videos.  And possibly a test at the end so pay attention!  Ok, there won't be a test but pay attention anyway - there might be penis!

I thought I'd bring along some things that caught my eye recently for your perusal.  Three adverts and a film.  Don't worry, I'll be back to the usual 'look at this hot guy, let's all go and fuck him in the ass' format next time.  The first up is an advert for water-based drinks company 'Drench'.  Since those of us in the daddy/bear admirer community are starved of even shirtless scenes of hot guys in our TV & Film viewing (not including porn), it is something of a treat when something does come along.  The fact that this advert features a big, hulking bear, with no shirt on, getting hosed by a fire engine is something rather awesome.  He looks very weak and tired by the end.  Maybe that is something that I should consider doing to hot guys I like who are not interested in shagging me.  Just hose them with a fire engine until they lose the energy to fight me off.

Did you also spot the cute guy at the very beginning, wearing the rugby shirt?  Big Steve does for me in those braces I have to say.  Anyway, onto advert number two.  And I will stay with the drinks theme this time.  I'm not sure where this latest advert will be shown - it may only be broadcast in Scotland.  It is for Scotland's other national drink - Irn Bru.  For those of you who are unlucky enough to have never tasted it, it is a sort of fizzy, orange bubblegummy flavour thing.  It is not sold in the US as it contains Tartrazine.  Which frankly is a joke considering the amount of chemicals that are in most US-borne foods.  Canada get a watered down version that is not the same as the original.  Anyway, it is awesome.  Some Irn-Bru adverts are great, some are a little shitty.  And some are just ..... bizarre.  This falls into that category.  But there is nice daddy cuteness to be had behind the curtain.

Is it wrong that I find something really sexy about big ol' Y-fronts?

Onto our feature presentation.  See what I did there?  With having the adverts before the film?  Just like in the cinema?  Genius.  Fucking Genius.  The other night, my friends and I...  OK acquaintances and I...OK my box of double chocolate Oreo cookies and I (happy now bitches???) were looking for a film to watch on LoveFilm and something caught my eye.  A little picture for a film.  So much so that I didn't even pay attention to the name of the film.  This picture: 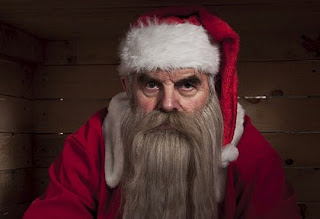 Well, there was no way I was not going to fire this baby up and get out my 'special lotion' and hankies.  It has to be said that the picture is very misleading.  That guy is in the film for a millisecond.  Close up at least.  If you look this picture up online, it will tell you his name is Peeter Jakobi.  It is not.  Peeter Jakobi has a lead part on the film and is far more terrifying looking.  But all is not lost.  There are some sights to be had.  The film is called 'Rare Exports: A Christmas Tale' and it just about one of the strangest things I have seen outside of David Lynch.  The legends of Santa Claus differ around the world.  The most common is the jolly, hot-as-fuck, bearded man who gives you presents and generally looks like he would be the best shag you would ever have.  In Europe, there are....more dubious tales of Santa.  Across Scandinavia, Germany, Austria, France and Holland, there are tales such as Santa having a demon who attacks and steals bad children, a version of Santa who wears black and goes by the name of 'The Whipping Father' to punish bad children (I may want to fuck that even more) and erm, Black Peter who is an incredibly racist depiction of a helper who steals bad Dutch children from their homes and takes them to.....Spain.  Spain?  What the Fuck?  Spain is awesome - how is that punishment?  Anyway, point is, Santa isn't so cuddly in some countries.  Thus, we come to Rare Exports, a Finnish film about a very, very bad Santa who is being thawed out.  He's a big-ass horned demon thing.  What looks like Santa are actually his elves.  Who are very vicious and - hooray - naked!  To describe it any more would ruin it.  Just go watch it.  Suffice to say, whilst some of the elves are bone-thin, there are few chubby ones there and you see cock.  So a film is made where they put a casting call out for older guys with big white beards to run around naked.  This really does sound like something that I would have tried to do (only I wouldn't have had any film in the camera).  I have attached a promo film that shows the hunting and capture of a 'Santa elf'.  It is worth watching - especially around the 2:53 to 4:48 minute marks (for maximum naked chubby white bearded cuteness). 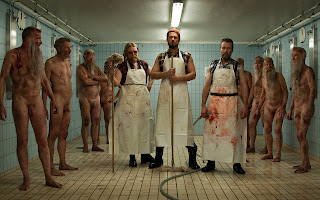