I am going to break with format a little with this post.  Don't panic and hurl yourselves out of windows - it's still essentially about a guy to consider molesting.  However, since I am a (chic) geek I thought I would discuss the place that I found him as well.  And that place is the original 'V'.  Now I quite like the new 'V' so this isn't about taking sides.  It's merely a reflection on how totally fucking awesome the original was.  When I say 'original', I am referring to the 'Miniseries' and 'The Final Battle' .  Not 'The Series' that followed a year later and lamer than Tiny Tim from Scrooge (and I mean 'Scrooge' the Albert Finney version - fuck I never wanted a sick child to just die so much).

Anyway, since there may be younger readers who have never experienced 'V' (and therefore have not lived), I am going to give you all the key facts that you need to know.  For those who can't wait, the hot guy is the Priest - actor Thomas Hill.  'V' opens with our hero Mike Donovan (the facially-challenged Marc Singer) filming a revolution in some South American country.  Mike makes his living as a cameraman who wears the tightest jeans known to man.  He's joined by his chirpy, know-he's-soon-to-be-dead-as-soon-as-you-see-him Korean-American sidekick (I'm not entirely sure what his job was).  Escaping from danger, they look up and - fuck me - there's a huge freaking spaceship in the sky.  The special effects in 'V' are still pretty impressive for a TV budget in the '80's.  Over the next while you are introduced to some of the other protagonists.  There's heart of gold street hoodlum Elias who we meet breaking into a house.  He properly knows how to rob a house.  First he turns a radio on to make sure it works before stealing it.  Then he turns the TV on watches a report.  Stealthy.  Then there is his super suave Doctor brother who apparently attended the 'Luther Vandross School of Medicine'.  Earnest and pretty medical student extraordinaire Julie.  And a Jewish family.  Honestly, that's all you can say about them.  Every facet of their personality was about being Jewish.  'V : The MiniSeries' used alien invasion as an analogy for Nazi Germany.  This was about as subtly done as a Hippo in a tutu smashing a brick into your face with a sledgehammer.  Therefore, the oldest of the Jewish family is a concentration camp survivor who has a neat line in inspirational speeches and soap-opera poignancy. 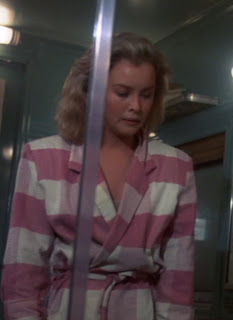 You know you are in the 80's when even your bathrobe has shoulder pads.
This then brings us neatly to the Visitors.  Who dress red Nazis (kinda sexy actually).  To be honest, you can forget them all except the only really important one - Diana.  Diana is Alexis Colby in jackboots.  Worth the price of admission alone.  The Visitors project a friendly, trustworthy face to the unsuspecting public.  Except that you know Diana is evil from the second she appears on screen.  She instantly is full of furtive glances, saucy evil smiles and does that wierd hip-shifting thing whenever she stops walking that only evil female characters do.  But if you weren't sure, they made her a little bit 'lesbo' just to re-enforce her wickedness.  Lots of shooting and inspirational speeches later, 'V:The Final Battle' arrived which jettisoned a lot of the Nazi analogy in favour of out and out action.  Whoo-hoo!!  This is where our boy Thomas Hill comes into play as a kindly priest who happened to fight with freedom-fighters in South Africa (which garnered him instant respect with the only two black characters in the resistance - did I mention this was set in LA?).  A bit of a matinée - daddybear.  He certainly brought some timely eye-candy to the proceedings.  The other reasons to adore this part of V was the introduction of Michael Ironside.  Honestly, is there anything he doesn't make better by being in it?  Also.  The alien baby.  That terrified the shit out of me as a kid.  And now I don't know why.  It was by far the shittiest effect of the show and it was fucking cross-eyed.  Again lots of shooting and running around.  Donovan bitch-slapping his 'friend' Martin (a Visitor fifth-columnist) around whenever he wanted something.  What a prick.  The end plan involves lots of hot-air balloons and some strangely out-of-place softcore porn music.  Oh and an alien/human child with superpowers for no explicable reason whatsoever.  And does our boy survive?  Well - I have no idea.  He goes aboard the mothership then sort of fucks off.  There are a lot of stories in 'V' that they didn't bother resolving - Donovan's brain-washed son just sort of fucks off as well. But who gives a shit about him? 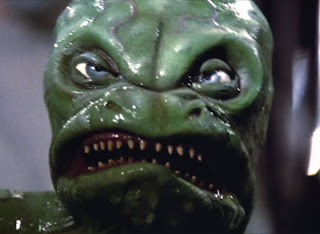 The dangers of unprotected sex 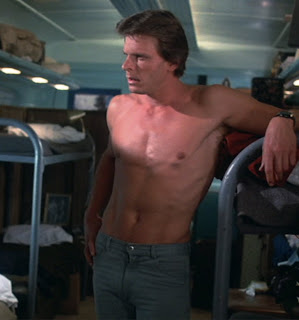 "Never mind my face - look at the awesome jeans.  They are tattooed on me"
OK enough of my utter bullshit - here is the man himself. 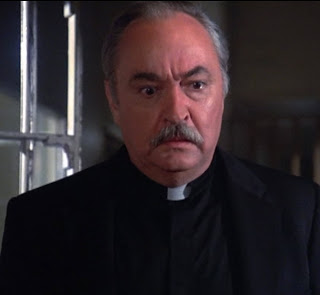 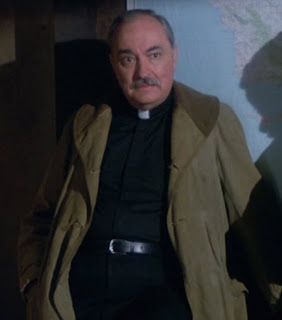 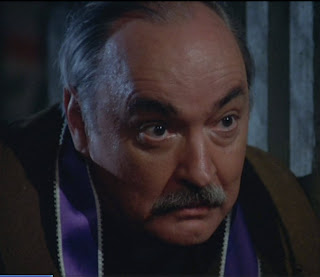 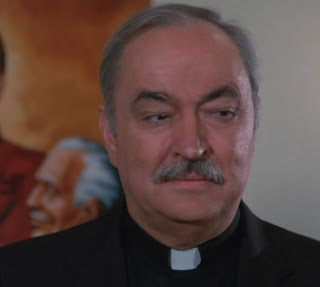 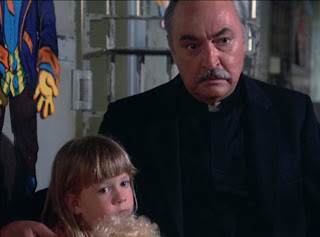 "OK.... Who left the Priest alone with the child?" 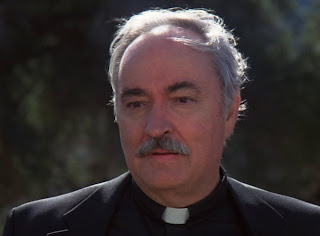 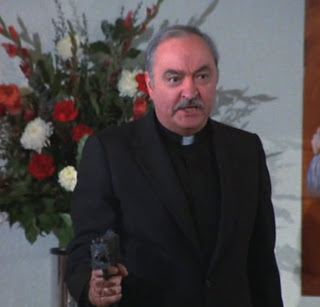 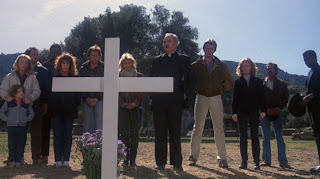 I have never been to a funeral before where the Priest conducted the service with his hands in his pockets.  I prefer my priests a bit less casual thank you very much
Posted by Unknown at 00:42